The Traveling Hillbilly Goes to Oscars

I have to admit, when I found out on Thursday that I was getting the chance to attend the 2011 Academy Awards, my first thought was how exciting! My second thought was, will they all know I'm an impostor? The glitz and glamour of Hollywood are so far removed from my Kentucky roots. I just can't imagine hearing celebs like Nicole Kidman and Colin Firth saying, "I'm fixin' to go the Oscars." Julia Robert's? Well, maybe. Will I be the klutz that steps on some celebrity's expensive designer gown? Or will I wind up tripping on the red carpet as I get pushed aside to make room for the non-impostors?!
Posted by World Traveler at 11:48 PM 2 comments:

Email ThisBlogThis!Share to TwitterShare to FacebookShare to Pinterest
Labels: California

Yes there were long lines and yes it was very disorganized but the Traveling Hillbilly was happy to “suffer” through these inconveniences for this once in a lifetime experience. Going to the Super Bowl is something that only a small percentage of the population will ever get to experience and I am grateful to now be among that small but lucky group. It truly was an amazing event. The pageantry, the thrill, the excitement and energy of the fans made for one very memorable evening. Before the game even began, we knew we were in for a thrill.

Chills ran through me as we entered the stadium. It truly is a stunning piece of architecture. The sheer size and magnitude of the stadium make you pause for just a moment. We were fortunate enough to be on a level with lots of great bars and food just steps away. We got even more excited to discover our seats were on the 50 yard line! WOW! What a view. There is a giant screen TV that hangs above the field. It’s like watching the game on a movie theater screen. Although at times it could be distracting.

While the game started off kind of slow, the Traveling Hillbilly could not have asked for a more exciting game for my first Super Bowl! The Packers had a strong early lead but the Steelers fought back, making it anyone’s game in the 3rd quarter. This tense but exciting action continued well into the 4th quarter. With fans from both teams on their feet often, rooting for their team, you could feel the camaraderie in the stadium. There were strangers high fiving one another, shaking hands and often even hugging, sharing in the joy of their team’s success. There was also some good natured rivalry going on. While the teams battled it out on the field, so did the fans in the seats. There was some back and forth shouting and ribbing, but it was in good fun and everyone around us displayed true sportsmanship. While the Steelers were not able to pull off what would have been a monumental win, they came back and delivered a truly exciting game right up until the end! The Traveling Hillbilly thanks both teams for great game!

As if the excitement of the game wasn’t enough, the halftime show was spectacular. Again, I have to say, WOW! I have heard it did not play as well on TV, but live it was amazing. It was full of energy and visually stunning. It made us all want to get up and dance. We were very pleasantly surprised to see both Slash and USHER there as well. The Black Eyed Peas and Usher put on one amazing show. It was the best Super Bowl performance I’ve seen. It really is a shame if it did not come across on television as the fantastic show it was.

So from this humble fan’s experience, it was a night to remember! So for those of you who only remember the long lines, the disorganization and the petty frustrations of getting to the game, shame on you. Maybe you’ve just been to one too many Super Bowls. Maybe you are the type of person that is never pleased and always focuses on the bad. Now don’t get me wrong, I understand the disappointment Steelers fans must have felt and I empathize with those few hundred folks who showed up with a ticket only to be turned away because their seats were deemed “unsafe.” But for those of you who actually made it inside the stadium and still walked away complaining about the inconveniences you had to deal with, then maybe you need to take a time out and realize how fortunate you were to witness such a spectacular event. If you can’t, then maybe next time you should give your ticket to someone who would truly appreciate this potentially once in a lifetime experience.

A huge shout out to my friends at ESPN. A huge thanks to all of you for one of the Traveling Hillbilly’s greatest adventures!
Posted by World Traveler at 9:32 PM No comments:

It All Started at the Tailgate Party

Of course, tailgating is part of the whole Super Bowl experience. Well ESPN took tailgating to a whole new level! We went to hangar 1048 at the Naval Air Station Forth Worth. There were two “rooms” inside the hanger. The first was set up with tables and plenty of food. We had burgers, fries, sausage, chicken, veggies and some mac & cheese with peach and berry cobbler for dessert. There was of course, plenty of beer, wine and cocktails to go around. But the food was not even the highlight of this tailgate party. In the second room, they had all kinds of interesting things for us to see and do. We got to tap into the kid inside each of us and play all afternoon. There were flying simulators, a real fighter plane, guns, shooting games and of course a mechanical bull. After all it is Texas! The Traveling Hillbilly skipped the mechanical bull but had a great time checking out the planes, helicopter and even a dump truck. There were several members of the reserves on hand to talk to us about the equipment and what they do. It was very eye opening and we should all be thankful for what these brave and often, very young, men and women do for us.
Posted by World Traveler at 9:29 PM No comments:

After a great night’s sleep, the Traveling Hillbilly was rudely awakened by the hotel alarm sounding off! The alarm was followed by an announcement telling us to evacuate the building! What? Evacuate the building? Many thoughts ran through my head; could this be a terrorist attack, do I have time to put on some jeans, brush my teeth, grab my shoes? While I’m still processing all these random thoughts, a voice comes back on the intercom system telling us not to panic, they are checking on the alarm and there is no need to evacuate the building. Potential emergency situation averted! Still don’t know what happened, but am glad all turned out okay!
Posted by World Traveler at 10:10 PM No comments:

The Traveling Hillbilly Does Dallas 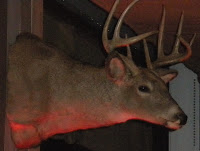 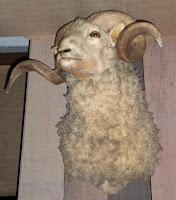 Yes, it is true. The Traveling Hillbilly is actually in Dallas/Ft. Worth for the Super Bowl. So I landed yesterday to find everything blanketed in snow. What a beautiful but concerning sight. After a little confusion with the car pick up, I got to the hotel with just enough time for a quick workout before heading to dinner. We had dinner at a fantastic restaurant called Grace, www.gracefortworth.com and then it was off to River Ranch for ESPN Magazine’s big party of the weekend. Can we say, interesting wall hangings? Deer, sheep, all kinds of interesting things hanging from the wall (see attached pictures). We got to see Kid Rock perform, who was surprisingly fun and energetic. It had been a long day of travel and fun so we decided to call it a night and headed back to the hotel early. Well, at least we thought it was early. Turns out it was actually 2am!
Posted by World Traveler at 10:05 PM No comments:

The Traveling Hillbilly @ the Super Bowl?

Could it really be true? Is the Traveling Hillbilly actually going to the 2011 Super Bowl? Come back over the next few days and find out.
Posted by World Traveler at 12:28 AM No comments: