As soon as we arrive, we grab lunch, then it’s off to check out our rooms and get ready to go on our first game drive!  We’ve only been here 2 hours and we are already going on a game drive.  They do two drives a day, one at 6am (with a 5am wake up call) and one at 4p.  They are both approximately 3 hours.


We hop back in the Toyota Land Cruiser and are joined by a very sweet couple on their honeymoon.  Within just a short time we come across a small group of elephants.  These really are magnificent creatures.  There’s even a little baby in the bunch!  Shortly thereafter we see a giraffe!   We also see an African buffalo and some wild boar.  It’s dark when we come across a pride of lions.  They are just lazing around.   We watched them for quite some time, until they decided they’d had enough.  One of them starts to walk toward our vehicle and we slowly start to back up.  One by one the lions form a single file line behind the one in the front.  It’s like they are showing us who is boss and telling us to back away.   It was quite fascinating to see.  We just continued to back up slowly. 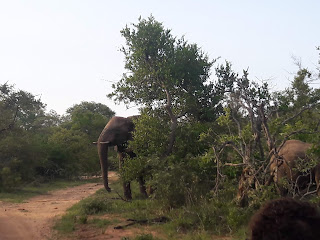 We are thrilled with our lion encounter!  Now it was time to head back to camp for dinner.  As we came around a corner shortly after seeing the lions, we saw two Zebra.


Here we’d been at the camp for all of six hours and already seen and experienced so much!
Posted by World Traveler at 11:06 PM